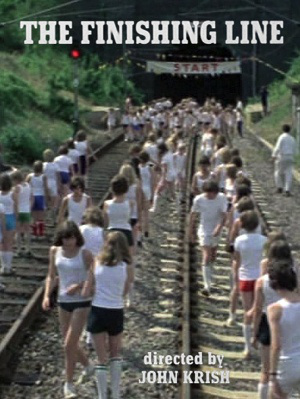 This British government public information film is aimed at children and shows them the dangers of playing on railroad tracks.

So this is the second public information film short I’ve decided to review here, with the first one being the pretty brutal “Apaches“. Is this as nasty a viewing experience as that one was? Well, I’ll just state that “The Finishing Line” was shown a couple of times in Britain until it caused so much controversy for it’s graphic death scenes, that it eventually got banned. I think the controversial plot, which I am of course about to go in-depth about, maybe had a lot of people confused too, as it seems to show groups of school children being encouraged by teachers to play on the tracks, you can imagine this going down well with parent groups.

We start by seeing a young boy on a bridge overlooking some railway tracks and seeming to remember an assembly at school where his headmaster is warning the children about the dangers of playing on the tracks. As the headmaster bellows “The railway is not the game field!”, the boy thinks “yeah, but what if it was?” and starts to devise all types of games that he and his school friends could play on them. We then see exactly what the boy is imagining and a huge crowd is gathered on the hill right next to the tracks, including a band and paramedics placing stretchers down on the lawn. There’s also four groups of children wearing different colour sashes to indicate which team they’re in.

It’s not a good start for the blue team…

The announcer for the day declares that it’s time for the under 9’s fence breaking contest, so the four teams take their places as the lad who’s imagining all this tells us the rules. They’re simple enough, the teams have to make a hole in the fence, get through, run down the embankment and across the tracks to the other side. Easy. So when the referee’s happy, off the kids go tearing at the fence like starving zombies. In case you actually care about the results of any of these events, then I’ll tell you that the red team are straight through and dominating the race early on. It’s pretty close for the rest until a girl in the blue team trips on the track and is knocked unconscious. The rest of her team try to help, but a train comes so they have to leave her to be run over. The yellow team come second to the reds with green in third. The blues get disqualified for failing to complete the course.

After the dead girl is covered and carried away on a stretcher, we head straight over to the 12 and under’s stone throwing event. Our narrator tells us that the teams have to hit the train with stones from about ten feet away, with a smashed window scoring two points, and four going to a direct hit. so as a train approaches, the kids are primed with rocks and start launching them as it passes them by. When the train stops at a red light a few yards up the track, an official boards it and tallys up the score. Red and green both smash windows so get two points each, the blue team manage to injure a passenger so they get six, but one of the kids in the yellow team was obviously thinking fast and managed to twat the driver in the face, this scored them eight points. Well done yellows.

Keep watching kids, it’s for your own good.

The “last across” event is announced next and so it’s over to the day dreamer to tell us the rules. Two teams start on one side of the track with the other two on the opposite. There is a “Go” sign placed further up the line and when the train passes it, the kids have to bolt across to the other side without being splattered across the tracks. Apparently they’ve got about three seconds to do this which should be fun. So the train passes the sign and the teams are given the all clear to start running, but it’s basically mayhem as the teams from each opposite side collide into each other and the train piles into them. The death toll here is pretty high, but blue manage to win with red in second, followed by yellow. This wasn’t a strong event for the green team as most of them perished. Oh well, onto the last event, the great tunnel walk.

This event speaks for itself really, the kids have to walk through a tunnel that stretches for three miles, and get to the other end without decorating it red. I really don’t fancy their chances, but hey, you never know. The kids aren’t wearing sashes anymore, so it seems it’s every child for him/herself, I guess there isn’t much of a green team left anymore anyway after the last event. So off they head on their little tunnel adventure and it looks like there’s a couple of hundred of them at least. As they all disappear into the darkness and out of sight, we see a train come from the other side and plough through. A while later, after the band have played a little ditty, we see a boy stumbling out of the finishing side covered in blood and dirt, soon followed by a handful of other children in the same state.

After the results are in, the paramedics appear from the tunnel carrying the bodies of the dead children that didn’t make it and line them up on the tracks. This scene is quite horrific and looks like something from a war, or a zombie film, but with kids. This is the last image of the boy’s day dream, but it doesn’t really make it clear if he now thinks it’s a bad idea to play on the tracks or not. I mean, this was all in his head, what’s he doing imagining loads of kids getting killed anyway, is he a psycho? I’d keep my eye on him if I was the headmaster.

Again, like “Apaches“, this was shown in schools up and down Britain in the 70’s and 80’s, and even though I don’t believe anything in this lives up to Sharon’s death in that particular film, it is bloody well gory. I’d have to say that this has as much blood and death in it as the average horror film (not the special Asian ones I get from that guy’s car boot, but the average ones) if not more. I can only imagine a child seeing this either being scarred for life, or just becoming desensitised to violence like I did when I accidently watched a bondage film when I was about five. Either way, I don’t think they’ll be running off to the train tracks anytime soon! Cheers!