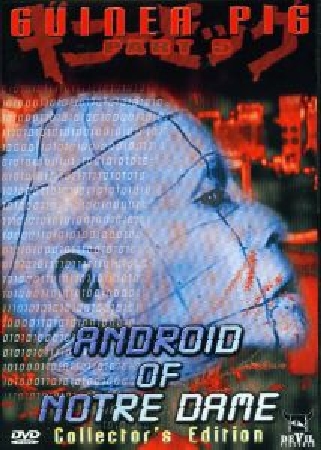 So we finally come to part 5 in this “Guinea Pig” marathon. Yeah, it’s the one I’ve been dreading. I’ve consistently said this is a bag of gash, but hey, it was a long time ago that I watched it and it was straight after watching the impressive first four films, and that was when I thought part six was part four and, well, I’m not getting into all that again. Maybe it’s improved with time, I’m ready to view it again now with fresh and very beautiful eyes. You may have noticed if you clicked the IMDb link, that they have chosen to call this one part 2. Seriously, I’m not prepared to get into it. I’d also love to be able to tell you whether that guy on the DVD cover is meant to be a total “Hellraiser” rip-off or not, but I just don’t really care enough to even know. Let’s just get on with it. The sooner we start, the sooner it’s over.

Even the title screen is crap in this film, after all the great ones we’ve enjoyed in the other Guinea Pigs, this one is just a let down. So we see some guy in crappy old man make-up mumbling some expository nonesense before we meet the midget that might be the star of the show, I don’t know. He’s randomly typing numbers into an 80’s computer (he’s even slower than me), as we see various animals in jars. I don’t think any of the animals get harmed which is unfortunate because at least that would be something to talk about. I’m too depressed to even try and work out if that’s a joke or not. More exposition. “The problem is grouping the data” he explains to nobody. He’s a scientist, a little scientist. I can’t wait to find out what happens to him and his crazy friends! 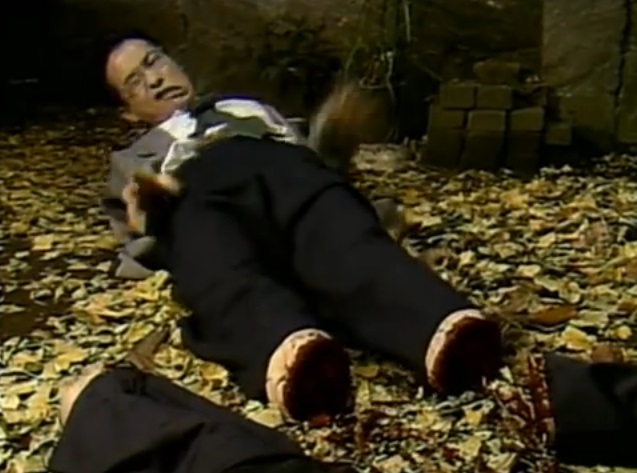 The midget, sorry, I can’t keep calling him that can I? His name’s Karazawa. Karazawa gets a phone call from some guy called Kato (hey, it’s the guy from “Tetsuo: The Iron Man”), who tells him that he knows what his game is. Of course, for the benefit of the viewers, he explains to Karazawa that what he needs is cash and stuff to do tests and stuff to help his sick sister and stuff. He says he can help him but he needs ten million yen put into three different bank accounts. Kato then presses enter on his keyboard and all the bank details somehow appear on Karazawa’s screen 80’s tech stylee. Look, what’s going to happen is Kato is going to send over a dead girl for Karazawa to try and revive somehow. I’m bored.

Karazawa leaves his lab, which is a bunker in his garden, and enters his house to give his dying, normal-sized sister her medicine. They have a chat about her illness and it’s like it’s the first time they’ve ever talked about it, and if that isn’t enough for the audience to realise how serious it is, she goes and has a minor heart attack. I’m starting to think this whole film is just pure exposition. It cuts to Kato on a computer, I don’t know why. Later on, Karazawa get’s his delivery of a very fresh looking dead girl who’s been deceased for five days, and starts putting a load of electrodes on her, making sure to brush her tits as much as is possible for an actor in a film to get away with. He does a load of nonsensical tests and the scene just drags and drags. Even this blatent filler is treating the audience like we need to be force fed what’s going on as Karazawa points at everything and nods just so we know it’s all going well, until it doesn’t and he folds his arms really dramatically and looks frustrated. I hate Karazawa. 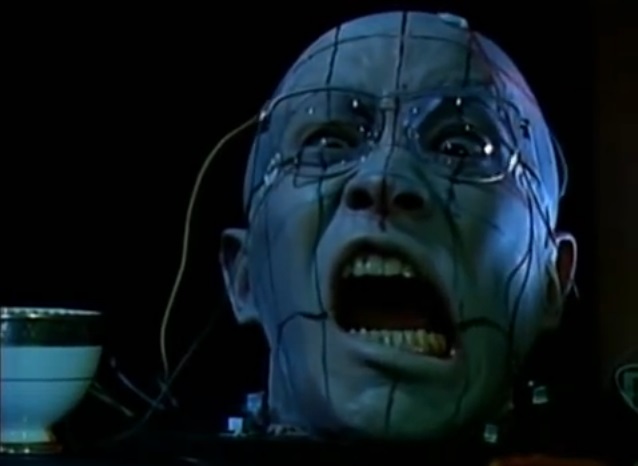 What Mini Frankenstein is frustrated about is that he pumped too much electricity into the body and it started to kind of melt, so he gets all angry and stabs it in the tit about fifty times. Meanwhile the sister throws away her medicine, has a dream that Karasawa cut’s her arm off, then when she wakes up, she coughs up a load of blood. I think I should care about her or something. Maybe Kato’s presence can somehow improve this nonsense. He turns up at Karasawa’s door and tells him that he needs to kill someone in order to use the body to save his sister. Karasawa’s all like, “Nah, can’t be doing with it”, but Kato tells him that he’s put a virus on his computer and he’ll get rid of it if he complies. Um, so they go into the garden and Kato get’s his legs cut off by a flying circular saw that comes out of nowhere. I just shrugged.

So now Kato’s just a head on a table and he looks like pinhead without the pins. Karasawa hacks his brain and finds out who his wife is and invites her over. Oh yeah, he’s also attached a massive robotic arm to his emotions or something. Anyway, when his wife sees him, she doesn’t scream or anything, she just walks over and starts caressing his rotting cheeks, but with the addition of some “new data”, Karasawa rigs it so that Kato strangles his wife with his new bionic appendage. She is now dead, and so is Kato all of a sudden. Whatever. Karasawa cuts out her heart (for about ten minutes) and puts it inside his sister who died at some point. I must have missed that. So all this trying to revive dead bodies and stuff was just for a heart transplant? Oh piss off, film. The operation was a success but the sister is all depressed because she enjoyed being dead, I don’t blame her. We see crap old man make-up guy again and it’s Karasawa. I just want to kick him at a wall. The film ends, and so does my will to live.

You know what the most disappointing thing is? It’s got blood, it’s got tits, and it’s got a midget. That’s usually the recipe for a great Friday night, but this is the most bored I’ve been since Andy Murray sat next to me in a hospital waiting room. Honestly, I probably made it sound exciting, but that’s only because I’m such an exciting writer and probably regarded as a genius by many of you (oh you silly sausages, thanks!), but this all happens in over fifty minutes and about forty of those are as dull as ditch piss. No, my piss is definitely more entertaining than this. Sometimes it’s crystal clear, and other times it’s really dark and slightly worrying, which means it’s basically got a better plot. “Damian, you’re talking about piss again” Sorry, vicar. “You know what you have to do now, right?” Do I have to do a load of praying and shit? “No, you have to touch me here, and grab me firmly… here”. But I believe that may be a sin, vicar. “Do as you’re told, heathen!”, Will Jesus love me if I do it? “Just hurry it up, the congregation will be arriving shortly” Bloody women vicars… Boom! Plot twist!